Email ThisBlogThis!Share to TwitterShare to FacebookShare to Pinterest
Labels: quotes

"I told the referee, 'Look at his eyes, look at his cuts'. I did not want to damage him permanently. That's not what boxing is about." ~ Manny Pacquiao

Email ThisBlogThis!Share to TwitterShare to FacebookShare to Pinterest
Labels: quotes

The Girl Who Can't Be Found

I was supposed to meet my Tita (mom's 2nd cousin) for coffee yesterday afternoon. But when I sent her an SMS message to confirm, she told me that she'll get back to me after she finds her missing daughter.
The words "missing" and "can't be traced" ricocheted in my head.
My Tita told me me that her 11-year old daughter was supposed to arrive at 8:30 in the morning. The girl boarded the bus from their town at 7:00 a.m. to spend the weekend with her in the city. She's been doing it for some time now and has never been late for more than 30 minutes of her ETA.
As the hours passed, my Tita began to get more worried. She decided to go to the terminal to check if her daughter was there. But the girl wasn't there so she decided to proceed to the police station to report her missing.
I went with my Tita at the police station then at the bus stop where the girl was supposed to get off. We asked the vendors selling foods and beverages nearby if they saw the girl but all of them said no. We then proceeded to check one of the other few places her daughter knows about in the city but she wasn't there as well.
With the help of other relatives, we somehow managed to get hold of the bus number so we decided to go to the terminal to interview the driver. Someone informed us, after we've been waiting for over 30 minutes, that we should probably wait outside since the bus might not check in at the terminal anymore. True enough, we saw the bus on the side street about to turn a corner going away from the terminal. My Tita and I ran as fast we could and jumped on the bus as it was moving away.
It was already getting dark by then and we were pinning our hopes on the driver and conductor. We were both hoping they'd remember where my cousin got off. Unfortunately, both of them couldn't seem to recall much about her so the conversation was another dead-end.
By the time we finished talking with the bus driver and conductor, we were already running out of ideas as to what to do next. All the hours spent looking for her didn't bring us any clue that might give us a hint as to where my cousin went. Even the other relatives who went searching for her couldn't trace her whereabouts.
An hour later, however, I got an SMS message from my Tita's sister informing us that my 11-year old cousin's already home. Apparently, the girl got off the nearest town then boarded another bus going back near where she came from. She then spent the entire day playing games in an Internet cafe all the while oblivious to the escalating worries of her mom and other relatives who went looking for her.
After the initial flood of relief, I couldn't help but think that 1) there's nothing more difficult than finding someone who doesn't intend to be found and that 2) parenting could be, without a doubt, an exercise in patience.
by daudacity2drm @ 15:19 No comments:

The Symmetry of Words

"...every city has a single word that defines it, that identifies most people who live there. If you could read people's thoughts as they were passing you on the streets of any given place, you would discover that most of them are thinking the same thought. Whatever that majority thought might be - that is the word of the city. And if your personal word does not match the word of the city, then you don't really belong there." ~ Eat, Pray, Love (p. 137)

When I think about the place I love so much, I think about how my word fits its word seamlessly. It's like that very first time I stepped foot in that place and how it changed me. My friend Anna Liese and I were so moved by that visit that we vowed to go back.
A few years passed and I have not put much thought about that promise I made to myself. But we did go back. Anna Liese in 2006 for a one-year scholarship while I went back a year after her for what turned out to be a most unforgettable experience that further cemented my love for that place.
In my heart, I truly believe that whatever my word and that place's word may be, they somehow merge in amazing harmony thus creating the music that is the beating of my heart.
by daudacity2drm @ 18:32 No comments: 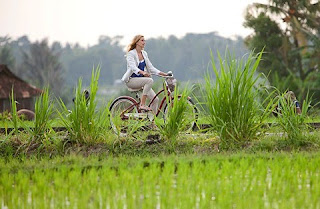 “I’ve come to believe that there exists in the universe something I call ‘The Physics of The Quest’ – a force of nature governed by laws as real as the laws gravity or momentum. And the rule of Quest Physics maybe goes like this: If you are brave enough to leave behind everything familiar and comforting (which can be anything from your house to your bitter old resentments) and set out on a truth-seeking journey (either externally or internally), and if you are truly willing to regard everything that happens to you on that journey as a clue, and if you accept everyone you meet along the way as a teacher, and if you are prepared – most of all – to face (and forgive) some very difficult realities about yourself….then truth will not be withheld from you. Or so I’ve come to believe.” ~ Eat, Pray, Love
(photo from somewhere on the Internet)
by daudacity2drm @ 22:28 No comments:

Email ThisBlogThis!Share to TwitterShare to FacebookShare to Pinterest
Labels: can do, in the zone, love

Rowing in The Social Network

rowing scene in the movie The Social Network. looks a lot less intense than a real race but not bad at all. good reviews + this scene = must see.
by daudacity2drm @ 22:15 No comments:

Email ThisBlogThis!Share to TwitterShare to FacebookShare to Pinterest
Labels: rowing

“In the early months of training you’re thinking ‘What the hell is all this for?’ Because the race is so far off. There’s so much tedium and discipline and brutal effort to hammer through. You have to resist the subconscious desire to put an end to all this self-inflicted hardship. But as the days pass and you feel yourself getting stronger, you begin to live for the next day. You punish yourself if with a will in training, because you know you’re facing a race that will suspend your life. Somewhere in the race, you will find out what it is you’ve been working for. And your asking big questions of your body, and when the right answers are coming back, it’s a feeling you know you will never forget.” ~ Dan Topolski, Adapted from TRUE BLUE, The Oxford Boat Race Mutiny
by daudacity2drm @ 21:41 No comments:

A Lesson in Hope

"Sam: It's all wrong. By right, we shouldn't even be here. But we are. It's like in the great stories, Mr. Frodo. The ones that really mattered. Full of darkness and danger they were. And sometimes you didn't want to know the end, because how could the end be happy? How could the world go back to the way it was when so much bad had happened. But in the end, it's only a passing thing, this shadow. Even darkness must pass. A new day will come. And when the sun shines, it will shine out the clearer. Those were the stories that stayed with you, that meant something. Even if you were too small to understand why. But I think, Mr. Frodo, I do understand. I know now. Folks in those stories had lots of chances of turning back, only they didn't. They kept going because they were holding on to something.
Frodo: What are we holding on to, Sam?
Sam: That there's some good in this world, Mr. Frodo. And it's worth fighting for."
The Two Towers, The Lord of the Rings Motion Picture Trilogy
----
Saw this on a friend's FB note only a few days after I rereading the trilogy. One of the most memorable conversations in the books. J.R.R. Tolkien's a genius.
by daudacity2drm @ 10:38 No comments:

Tales of a Believer